Not me, couple of years before I hit that milestone, but this is my 50th post according to my Blogger stats.
Few things on the go at the moment. First up, Michael Struck over at Neo-FX asked me to help out with a viewscreen for 'Star Trek: Renegades'. Must be a recurring theme for me - there was the window with a view for the 'Welcome To The Cosmos' teaser, the the Romulan viewscreen for 'Starship Farragut' and now this one. Here's the live action set and Scott Nakada's design. 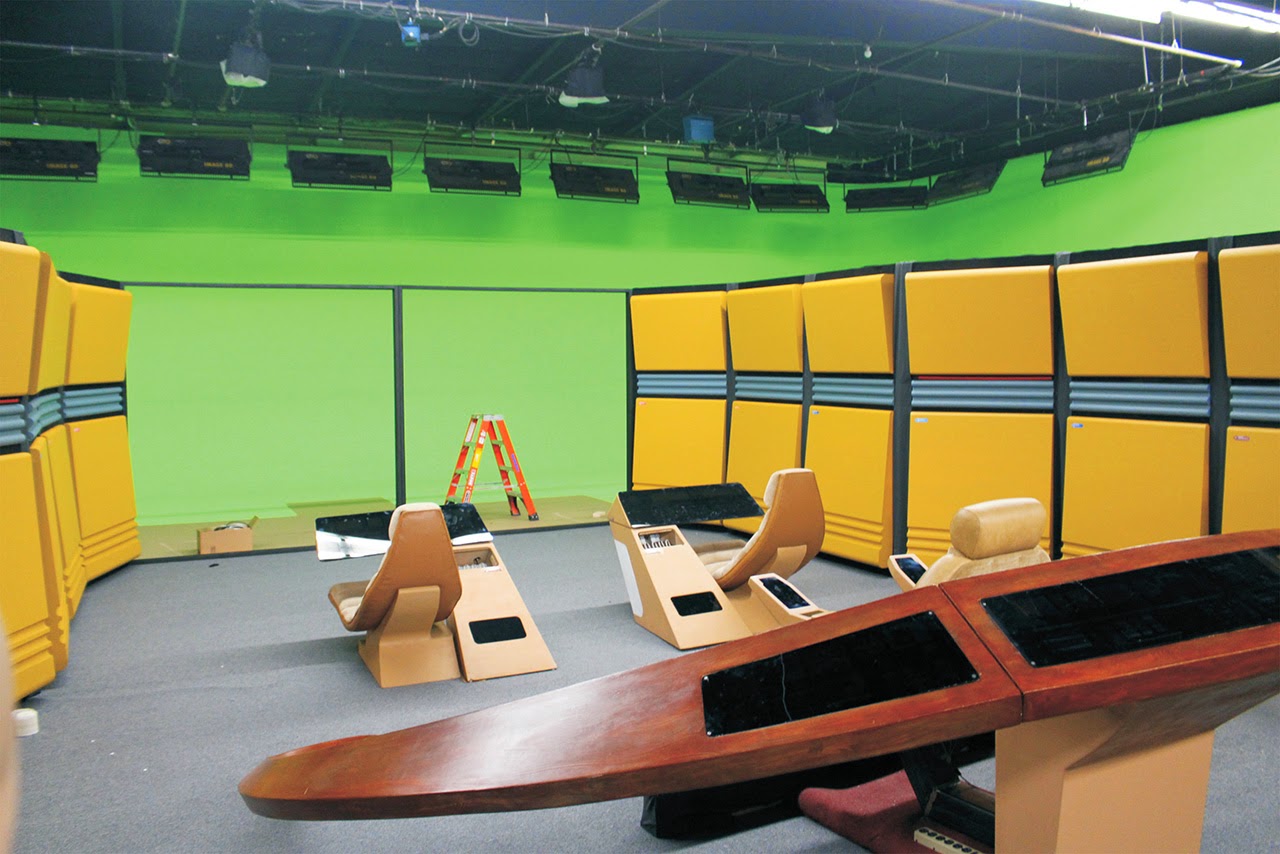 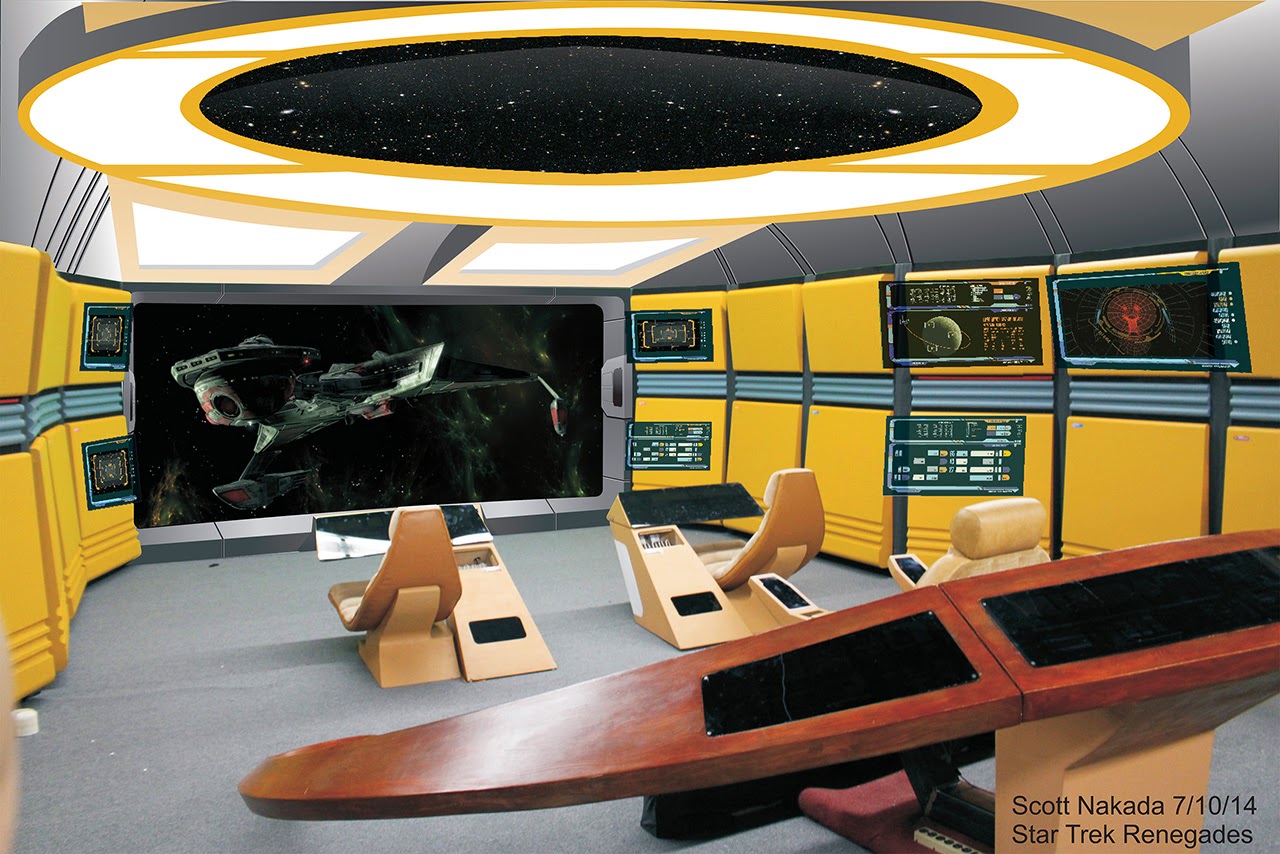 The more recent release of Cinema 4D comes with a nifty Camera Calibrator utility that allows you to define x,y and z axes from an image and will then set up a camera and scene to match. Makes trying to align elements of the 3D model to the set a hell of a lot easier. Some work in Modo with some fix up in Cinema produced this result. 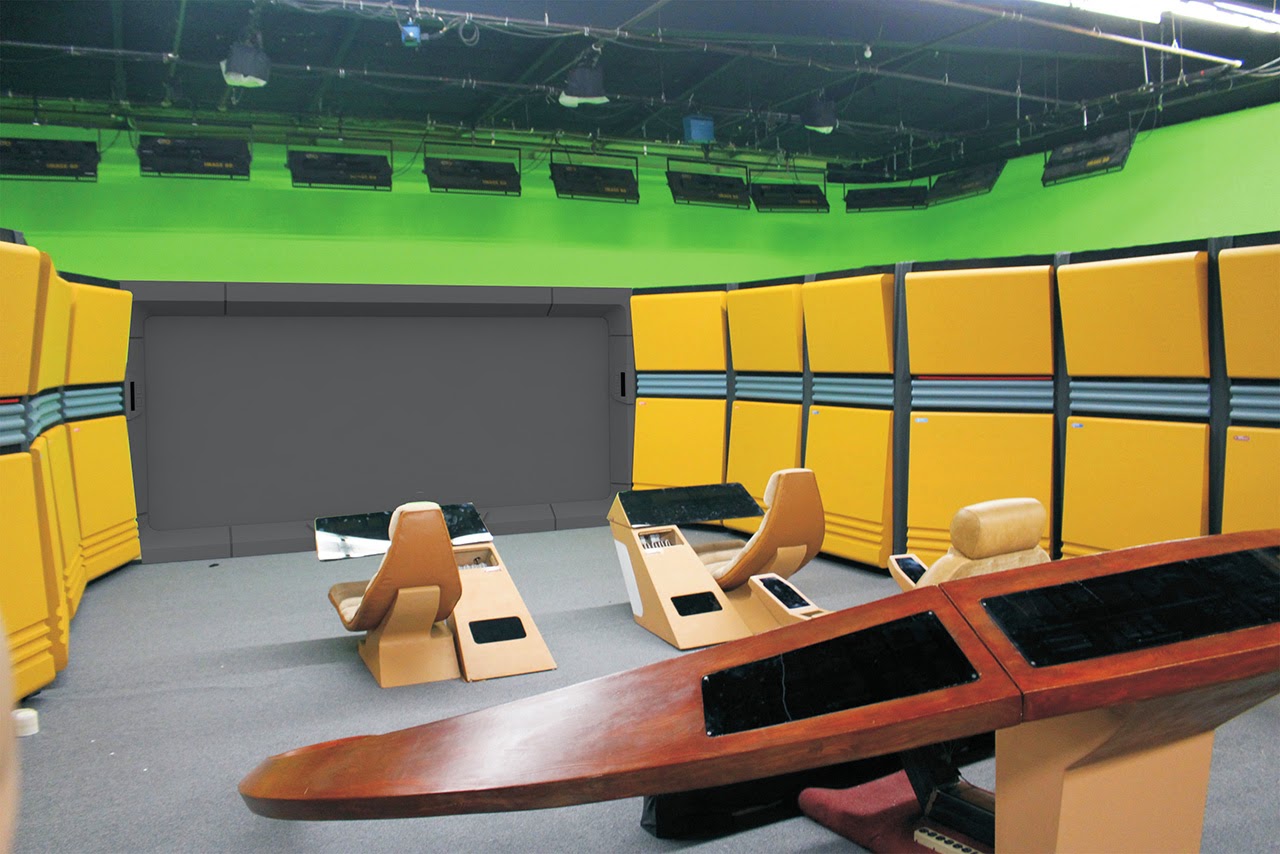 Still in the process of getting it textured and had to make some adjustments to get a uniform UV layout, then over in to Lightwave to get it textured and start on a lighting setup - still some work to do yet. 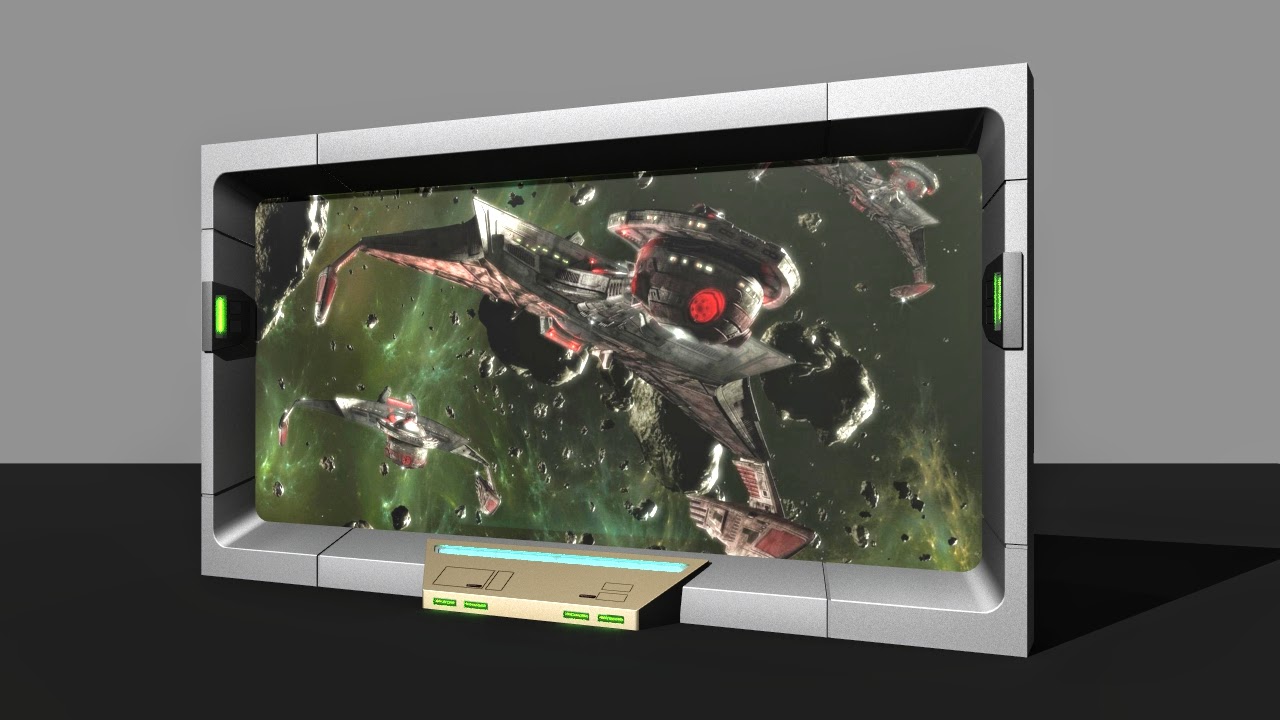 Meanwhile, back with Challenger. The pilot episode features the Phase II Enterprise. Initially, the production had hoped to be able to use Tobias Richter's new Phase II Enterprise, but, understandably, the folks at Phase II want that model kept strictly 'in-house'. My only solution was to build my own version based on images that Tobias had posted in a WIP thread over at SciFi-Meshes. There was talk of using one of the Phase II models that was available for download. However, those versions are all based on Matt Jeffries' unused Enterprise for the 1970's Phase II production. Tobias' version is something of a half way house between the TOS and proposed Phase II version - a practical choice to avoid expensive set rebuilding to match the 70's interior layout.
Here's the progress so far. 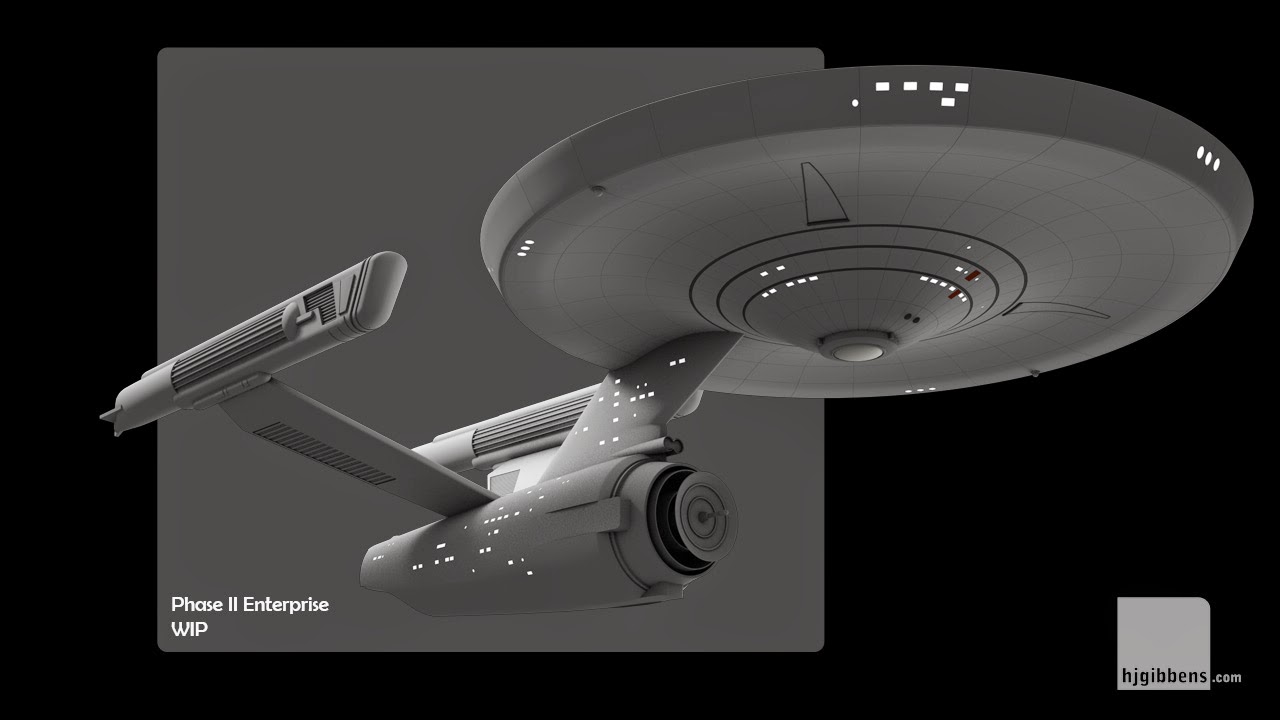 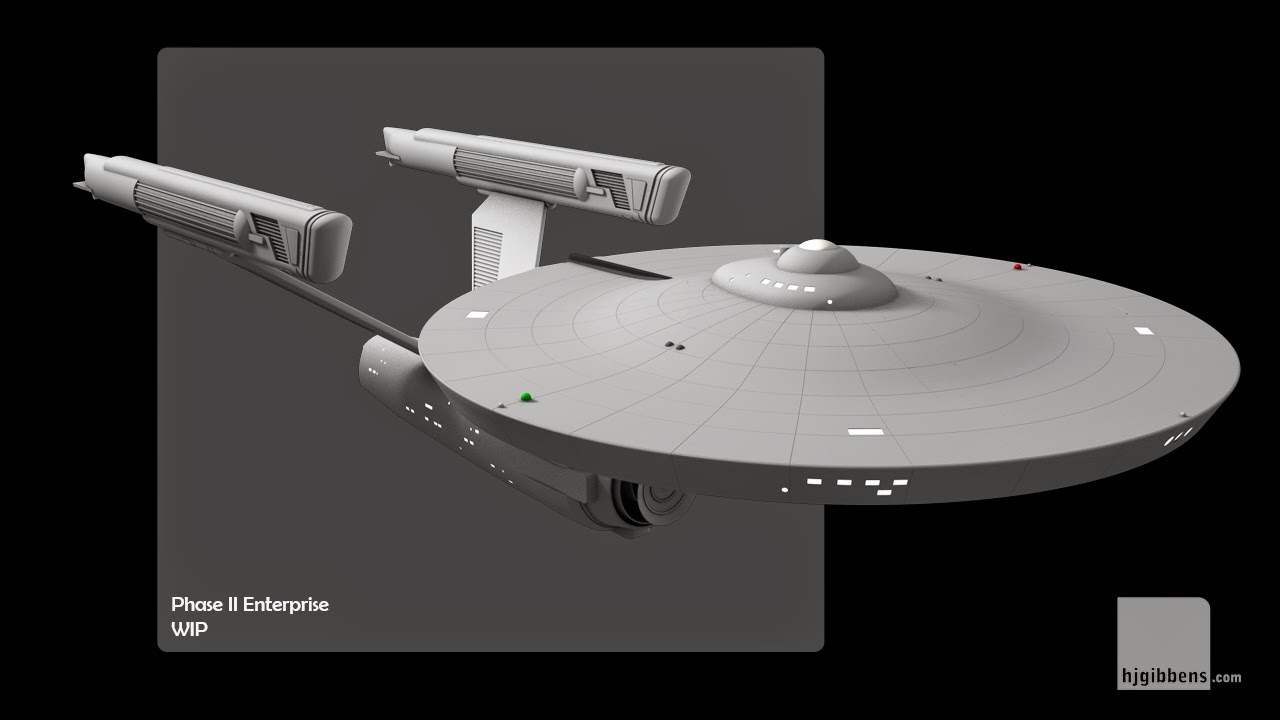 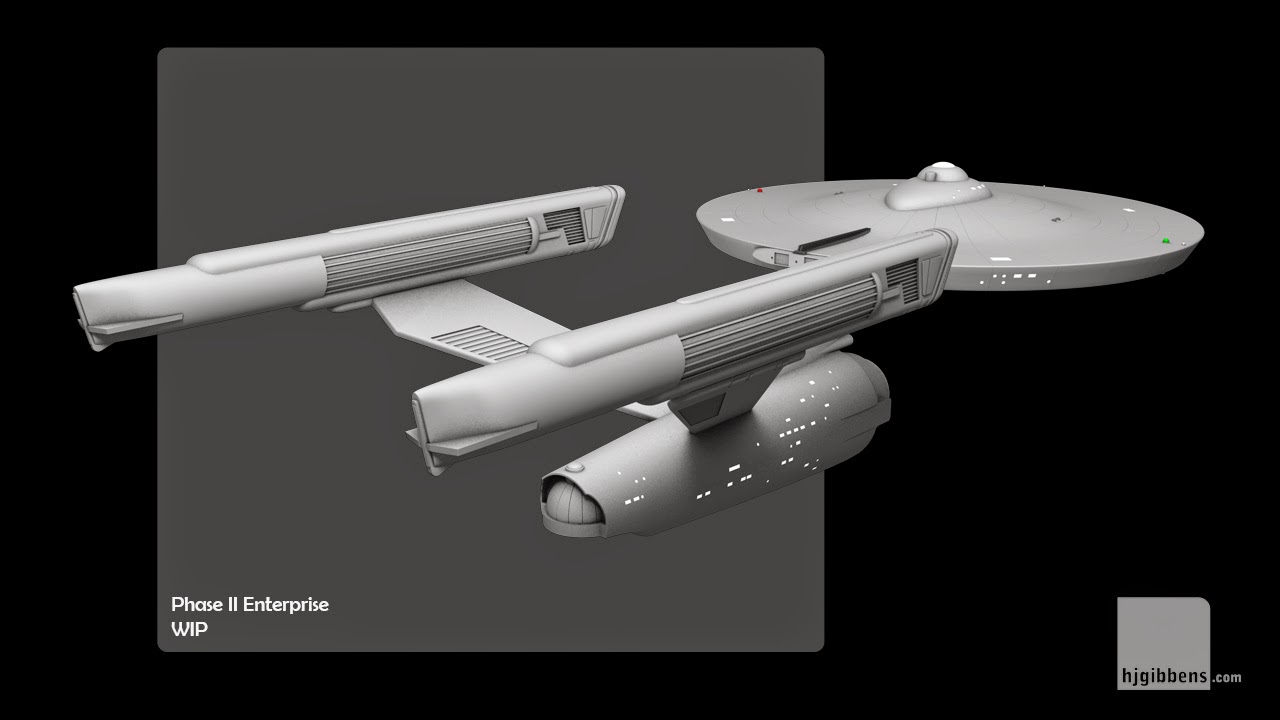 The Primary and Secondary hulls are essentially unchanged from the TOS version, allowing me to use an existing Enterprise mesh that I had already started. There's still a heap of detail to add from Tobias' version but it seems to be heading in the right direction.

Since this is my 50th post, I thought I would indulge myself a little. Apart from modelling Star Trek in a digital sense, I also collect the plastic kits as well. After adding another Enterprise kit to the collection, my wife asked how many versions of the Enterprise I actually had. Which prompted the following photograph. 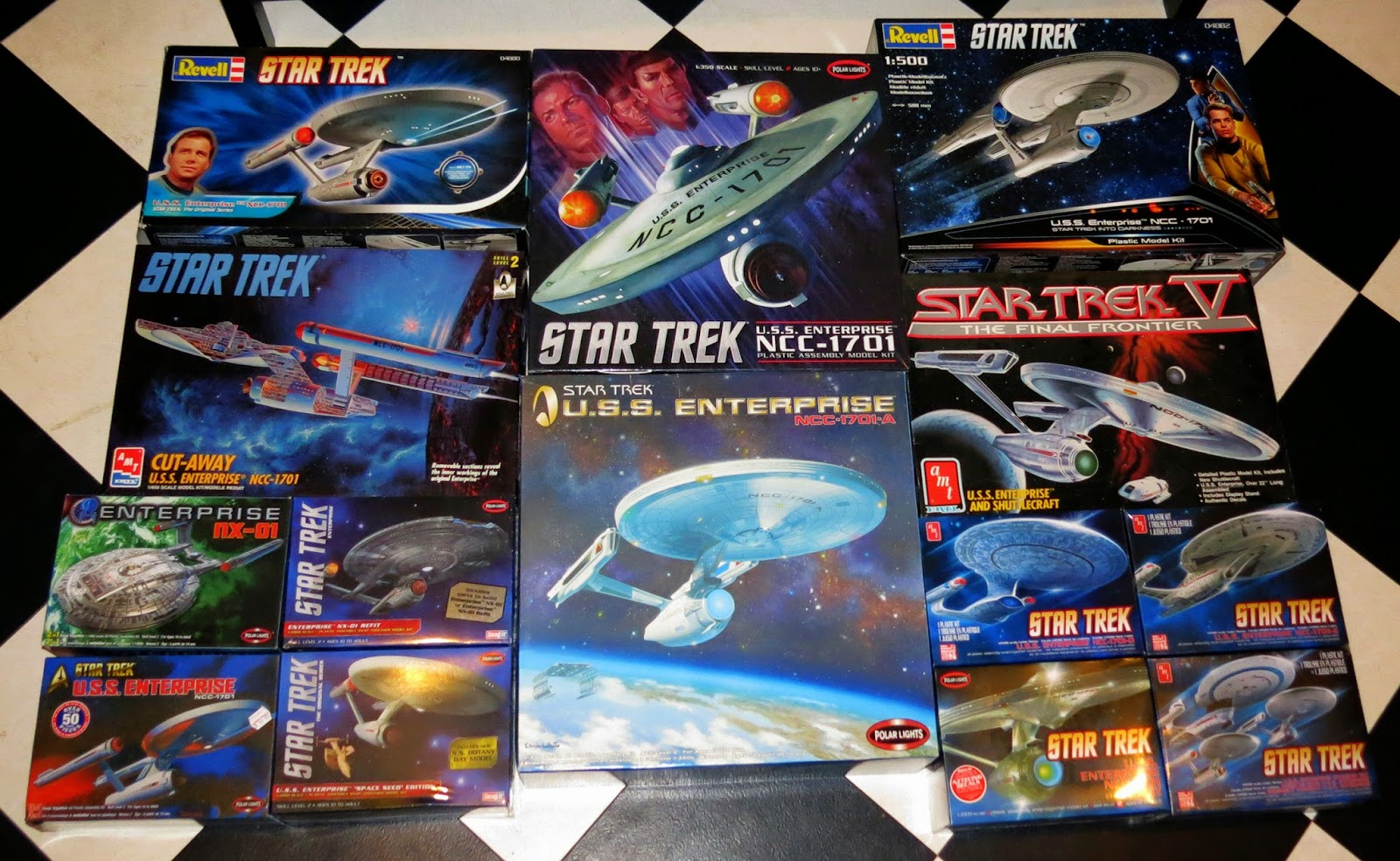 I think I count sixteen versions to date, although I now have a 1701-C on its way to add to the collection. And for those that know me, yes that is an Abrams-Trek Enterprise on the upper right - might not be quite my Enterprise, but it is still the Enterprise to a new generation. There is an old AMT kit hidden away somewhere, but storage in a mice infested shed has seen it come to rodent nibbled grief - I'll probably replace it with the recent re-release which did away with the raised grid lines on the primary hull and went back to the smooth surface of the original 60's version. And let's not forget the Dinky version, which still has its box and plastic shuttlecraft and torpedoes. 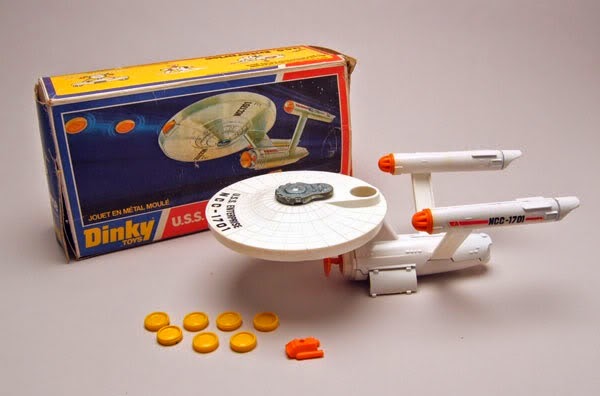 Have I made any of the kits yet? No - maybe that's something to look forward to in my retirement...
Posted by Henry Gibbens at 8:21 PM